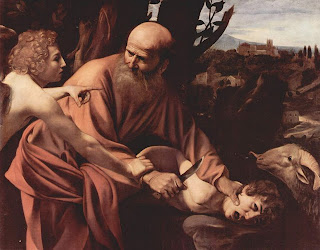 And the Lord said to Abraham, "Take your son, your only son and sacrifice him on the Mount of the Lord. In your obedience you will show that you are faithful to your God." So Abraham set out with his son to the place God had assigned. On the way Isaac inquired of his father, "Father, I see the wood but where is the offering for the sacrifice?" Abraham replied, "The Lord will provide an offering, my son. Though we do not see still we must trust." As they reached the place of offering they gathered stones and built an altar unto the Lord. Isaac inquired of his father once more, "Father, I see the altar and the wood, but were is the sacrifice for our God?"
Then Abraham took his son and laid him on the altar. "What are you doing, Father?" Abraham did not reply but silently bound his hands and feet. Taking a knife from his satchel he stood before his son trembling as he gripped the dagger with both hands and raised it high above his head. His eyes darted around looking for God's intervention. Surely he would spot a promise in the peripheral. He looked in the thicket for movement, but there was none. He looked to the skies for a angel, but the heavens were silent. The hopes of his heart were fading with every second of stillness.
With his eyes closed and his body shaking with a mix of fear and faith, he whispered to himself, "Though I do not see, still I will trust in the Lord my God." He looked around one more time certain that deliverance was hiding close at hand. He readied himself for the unthinkable and with the last of his strength he plunged the knife into the chest of his only son. The screams of Isaac were drowned out by the screams of his father.
Abraham was in shock, holding his son in his arms as he gasped for breath. Isaac looked at him with eyes of confusion and sadness. As Isaac's spirit left his cold body, Abraham wept aloud. He looked around wondering if he missed a sign, did something wrong. He waited for his son to come back to life for hours. He stayed on the mountain waiting for God to show himself, show his plan in all this. As the hours turned into days, his thirst drove him to throw his son over the donkey's back descending the mountain in eerie silence. The wind howled through the mountainside with the sound of whispering voices. The voices seemed to be chanting the familiar refrain of an ancient song. "why, wwwwwhy, whhhhh, whyyyyy..." The wind could not finish the phrase, but his mind completed the sentence. "...have you forsaken me?" "Wwwwwwhhhhyyy...have you forsaken me?
Arriving home, Abraham buried his son, but something else was buried that day that can't be put into words, certainly not the words of any human language.
________________________________
I wonder sometimes why this version of the story (not true, just to be clear) seems to be more true to life, especially after you watch a movie like Blood Diamond, Machine Gun Preacher and Hotel Rwanda. Or when you consider the famine in the horn of Africa or the single mom abandoned by her husband who gets two jobs to take care of her kids or the innocent child who is molested by a perverted coach. Why doesn't God always send the ram in the thicket or the angel to stay the knife?
I think it's easy to believe that when you trust God you always get the princess. You always slay the dragon. You always kick the habit or have your fortune restored ten-fold.
What I've learned over the years is that this idea that everything will work out if you just trust God isn't always true in this life. Have you read Hebrews 11 lately...yes, women received back their dead but others were sawed in two. Only on the other side did they find their ram in the thicket, the angel to rescue the damsel.
Everything works out except when it doesn't. And what do you do with God when it doesn't, when fantasy is exposed as a counterfeit of faith. What do you do when Jesus doesn't come and you get beheaded?
"Blessed is the man who does not fall away on account of me." - Jesus in Matthew 11.
I'm really having a great day and I'm in a good mood. I don't know why, but this story was in my mind as I was driving to work today and I couldn't shake it. Maybe God doesn't want us to be Merry at Christmas this year. Maybe he wants us to feel the pain of the world and that sympathy will bring the peace and good will that we're singing about. A peace that is often beyond understanding.
Just some thoughts I had this morning.

Nicole Bieri said…
Thanks for sharing your thoughts on this.

This is something I think about often when I think about God. There are two truths: God is good and Humans have fallen and are sinners. I have a hard time wrapping my mind around a world where the two exist together. It is a questions that has plagued me. If God is good, why is the world so broken? Is it because His hands and feet are not doing enough? We as humans, with free will, have made choices that have led to brokenness, emptiness, and darkness and as followers of Christ we need to bind up the broken and bring light to the darkness, but so often the darkness seems greater than the light. I haven't finished processing this information yet, but if you have any thoughts I'd love to hear them.