The Lazy, Disruptive Busybody in the Church - 2 Thessalonians - pages 111-118

"Keep away from every believer who is idle and disruptive and does not live according to the teaching you heard from us...they are not busy, they are busybodies." - 2 Thessalonians


Some verses don't need much of a breakdown.  This is one of them.

I think Paul is trying to protect people here.  He is tired of watching people expend inordinate amounts of energy on people who drain them dry.  He is tired of good people being taken advantage of by leaches who pirate off of the good graces of others.  Paul even writes matter-of-factly about slackers saying: "The one who is unwilling to work shall not eat."  Basically if you don't invest you can't ingest.  It's that simple.  No more illegal downloading.  If you don't upload, you can't download.

Idle people expect everyone else to do things for them.  They don't do what you tell them to do to better their lives.  They want you to do it for them.  They want you to notice when they aren't at church, they don't want to notice when someone else isn't there...heck, that has never crossed their mind that there is the flip side of the equation!  I mean, what would it look like if you went to church "to be love instead to be loved"?  Why, you wouldn't have time to think about what everyone else "is or is not" doing.  You wouldn't have that kind of time on your hands.  But idle people wait for everything to come to them.  They want to grow, but not as much as they want others to help them grow.  They want to serve, but not nearly as much as they want others to notice them to serving.  They are addicted to being serviced.  And consequently, their laziness makes them fat and sassy.

And sassy people are disruptive people, as the text describes them. They're among the most dangerous of all humans, in my youthful opinion.  And the idle ones tend to be the most disruptive ones because with all the extra time on their hands they tend to create drama out of thin air.  They are people-watchers and nit-pickers.  They spread gossip like a manure spreader and feed on negativity like vultures.  They love to drop hints and ask leading questions, so just in case they get caught, they can act as if they meant no harm.  They back-stab leadership, mostly out of jealousy because they either wish they could be them or they wish they could be around them like others they see.  They love to cast shadows of doubt and plant seeds of discord.  And these people find each other.  They can tell when someone else feels slighted and marginalized along with them, and they talk with each other commiserating in their "self-constructed reality".  The reason Paul said keep away from people like this is because "he wanted people to keep away from people like this".  It's not rocket science.

He finished up by calling these people busybodies.  I love how hard-care Paul is with flakey followers who feign faith and live like Lucifer.

Let me finish this post with my protective pastoral side:

"If you are this person I pray that the very Spirit of God would tackle you, put you in a full-Nelson, and wrench on you until you say 'uncle'.  If you hang out with people like this, do not pass go and do not collect $200 dollars...get out of this toxic relationship before you lose your reputation through association.  Sever it and don't feel bad about the amputation one bit.  You have my permission to get aggressive with this kind of "so-called Christian" in the church.  If we don't root this out of the bride of Christ, the gangrene will spread and eventually kill her anyways.  Eating without working, moving your mouth without moving your body, and spreading lies instead of love can no longer be tolerated in the church.  It is "kill or be killed" when it comes to this kind of person and we would do well to wake up to this before it's too late." 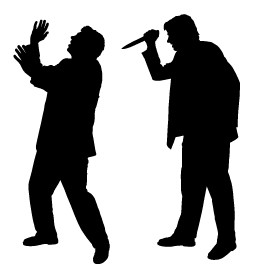 Jason said…
yeah...it is a little harsh. I think that is what has struck me about reading the bible is the unabashed harshness regarding certain subject matters and people groups. To tell people not to associate with idle, disruptive busybodies is pretty cut and dry. I don't like it much personally speaking because I'm one to be accommodating and graceful and patient...but that is not what I sensed in this text, which made it quite disconcerting. As I read the text, I'm both drawn and repelled by the "aggressive nature" of the writing. I think I have overlooked that along the way.

I agree with the discernment piece and those who hurt to cause harm and cause harm because they are hurting...good point. Sometimes it's hard to know the difference...but God's Spirit must give us wisdom.

Anonymous said…
Wonderful beat ! I wish to apprentice at the same time as you amend your
website, how could i subscribe for a weblog site? The account aided
me a appropriate deal. I were tiny bit familiar of this your broadcast provided
vivid transparent idea