There's no such thing as a self-proclaimed leader...

Like it or not, a leader can never be self-proclaimed.  Not real ones anyway.

All of these people can make you follow them, but they cannot make themselves a leader.  It's like making someone obey you without the power to cause them to love you.  Same deal.  Leadership is entrusted to someone, ordained from those who deem you and your track record worthy of this hallowed role.

I think you're a real leader when people follow you without any hitch or catch.  No perk or incentive.  No payoff or kickback.  A real leader is one that people exalt to that platform with no strings attached, nothing to gain other than good decisions and good direction.  They trust and then entrust.  They look to the person for altruistic advice because they've watched them conduct themselves in ways of wisdom.  They believe in their instincts.  They would stake their life on the persons intuition in a volatile situation.  They trust their horse sense.

A leader is a person who has people following them when they don't have to.

Sorry, Donald Trump.  Without money you're nothing but a lunatic with an eery combover. 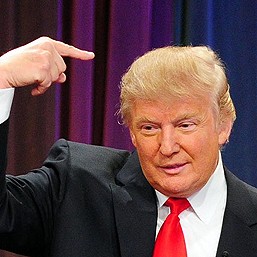